The Lovely Lady from Nestle

At a conference recently I happened to overhear a conversation between one of the speakers, a vice-president of Nestle Corporation, and a college student who was questtioning the VP’s glowing portrayal of Nestle’s social and environmental policies.

The student bravely interrogated the VP about their leading beverage category, bottled water. “Do we really need such a thing?” she asked. And, “I understand you are using 40% less plastic per bottle, but wouldn’t it be better to use no plastic at all?”

To each query, the VP had a persuasive, thoroughly reasoned response. Bottled water meets a real need in a society on the go. And did you know that raw 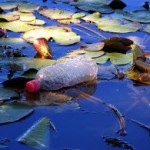 ingredient for making the plastic bottles is a byproduct of producing gasoline from petroleum? If it doesn’t go toward bottles, it will end up as some other plastic product or dumped directly into the environment. Glass uses way more energy to produce. And tap water is no longer pure.

The VP’s obviously believed what she was saying. I was impressed not only by her evident sincerity, but also by her patience, her attentive listening, and her lack of animosity in the face of what must be frequent attacks. Nestle, after all, is notorious among activists as a corporate villian: the target of a decades-long boycott over its marketing of infant formula to indigent mothers, and accused of over-pumping from mineral springs, collaboration with the Burmese junta, union-busting in Colombia, buying cocao from farms that use child labor, and so on. The contrast between this reputation and the VP’s fervent, heartfelt exposition of Nestle’s environmental virtues was such that a few left-leaning folks had to step out of the auditorium.

How to explain this contrast? Let’s try three theories.

(1) The woman is a glib liar paid well to make the company’s case. Either she is cynically aware of the truth obscured by her lies, or in a state of deep, self-serving denial. Either way, she cherry-picks a few positive gestures toward the environment (“Nestle protects orangutans!”) and draws from reams of biased, tendentious evidence that the company’s PR department compiles to make anyone who questions the company’s practices seem naïve.

(2) What the woman says is true. The company has learned from its mistakes to become a leader in social and environmental responsibility. There are many well-meaning people who still criticize the company, but that is because they don’t know the true story: not only is Nestle leading the way toward sustainability, but the industry as a whole is improving its practices. There are still challenges to deal with, but everything is moving in the right direction. The people in industry care about the environment just like you do. They get it now, and with your help they will continue making progress.

I hope I have done justice, in (2), to the Nestle VP’s viewpoint. I had a conversation later on with her, and found her to be whip-smart, good-humored, and affable. My impression is that she deeply and truly believes in her company and her work. So let me offer a third explanation:

(3) Not only does she sincerely believes everything she says, but it is irrefutable from within her frame of reference. If we take for granted the endless acceleration of modern life, then the convenience of safe bottled water is indeed a boon for people who otherwise would drink sugary soft drinks. It is a boon as well if we take for granted the continuing deterioration of municipal tapwater, its chlorination and chemical contamination. And if we take for granted our current petroleum-based economy, it is for all I know true that plastic bottles don’t add much harm.

The VP’s positions are unassailable unless we can expand the scope of the conversation. We have to ask questions at the level of, “What role do plastic bottles play in the accelerating pace of modern life, why is this acceleration happening and is it a good thing?” “Where does our busyness and need for convenience come from?” “Why is our tapwater becoming undrinkable?” “Why do we have a system in which it is OK to produce waste products that are unusable by other life forms?” And, “Is the ‘sustainable growth’ championed by Nestle possible on a finite planet?”

I believe the conversation must go deeper still. What that Nestle VP did to justify her company, others can do to justify our whole civilization, as long as we grant them certain premises about the nature of life, self, and reality. For example, if we gtrant the premise that primitive life was “solitary, poor, nasty, brutish, and short,” then any doubts about the overall beneficence of technology run into a brick wall. Similarly, if we grant the premise that nature bears no inherent tendency toward organization and that life is just a random collocation of lifeless, generic building blocks bumped around by purposeless forces, then clearly we need have no scruples about seeking to conquer nature and turn it toward human ends. And finally, if we grant the premise that each of us is a discrete, separate self seeking, at bottom, to maximize genetic self-interest, then ultimately there is no arguing over the broad legal and economic parameters of our society, which seek to overcome that wanton nature and channel it towards pro-social ends.

The Nestle VP’s views are more or less sound within the framework I have described above, the framework of “making life better through technology,” of the progressive conquest of inner and outer nature. Her views will not change until that framework crumbles. They are completely at home within the paradigm I call “the ascent of humanity.”

That paradigm, however, is indeed crumbling around us. The overall message I got from the Nestle presentation was, “Things are basically OK, we’re working on it, we’re making steady progress toward sustainability.” But looking around the world, it is becoming harder and harder to ignore that things are not at all OK, but rather that our problems – political, economic, medical, ecological – are proliferating faster than our technology can remedy them. More and more, the can-do promise of technology falls short, and we get the feeling that the world is falling apart around us.

It is that experience – of the world falling apart – that will change the views of corporate executives who genuinely believe they are doing good. Because within their operating paradigms, they ARE doing good.

My very dear reader, if you are not a corporate executive, if you are not a willing participant in the story of the triumph of technology, I would like to alert you to another dimension of that story that may inhabit you as it often inhabits me. It is the story of (1) above, in which the problems of the world are to be blamed on those awful corporate flacks who cynically lie and steal to gratify their own selfishness. This is the story of good versus evil, another expression of the will to conquer. It urges us into battle – a doomed battle, because the corporations have all the power. You are left isolated and powerless, at the mercy of hostile forces, and can ultimately only play along with the game and protect you and yours. Either that or you can become a martyr – but why, if the cause is hopeless?

A tiny, separate self, buffeted by vast impersonal forces, a victim, resentful, will of course seek to carve out a little space of security in this hostile universe. Story (1) plays into that feeling. But it is precisely that alienation from the rest of existence that underlies the very institutions we are trying to bring down. Acting from alienation, can we hope to create anything but more alienation?

In fact, the corporations don’t have all the power at all. They only do within the framework of a universe of force. In a universe of love, things are not at all hopeless. If we see the VP and people like her as people just like ourselves, then they can change as we have changed. If we see them as in (1), there is no alternative but to fight them. Maybe there is a time for fighting, for matching force with force. But I think if we carefully examine our victories in social and environmental justice, we will find that it was the power of conscience, compassion, and love that powered those victories.

My delightful acquaintance, the Nestle VP, is no different from any of us, living inside a story. We use the story we inhabit to justify all we do. Or perhaps it would be more accurate and less redolent of blame to say that these stories inhabit us, and use us to fulfill their telling. The story of the ascent of humanity is almost complete now, and a new chapter of the human narrative is ready to begin.